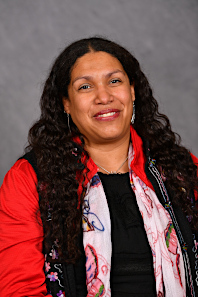 PULLMAN, Wash.—Though career coaches encourage job applicants to say “yes” with a can-do attitude, answering “no” to a Peace Corps question 22 years ago set Washington State University student Melanie Margarita Kirby on a career and academic path like no other. It’s one that will take her to Spain this fall for a nine-month Fulbright-National Geographic Storytelling Fellowship—WSU’s first.

“In 1997, the Peace Corps questionnaire asked if I would mind working with stinging insects,” the 45-year-old mother of two recalled, “and by saying ‘no, I wouldn’t mind,’ my life changed forever. I was introduced to beekeeping as a volunteer in Paraguay, and that led to my own small farm back in New Mexico, raising honey bees and breeding queens.

“That was right around the time of the ‘colony collapse disorder’ media blow-up and I knew I needed to be up to date on scientific research and environmental practices.” She knew about progressive research in a WSU honey bee lab, and in 2017, she was accepted to the land-grant research university to pursue a master’s degree in entomology. She wanted to be more of an authority on queen breeding and bee germplasm conservation, and to help other beekeepers and agriculture, in general.

“Now, having received the Fulbright-Nat Geo, I feel that all my blood, sweat, and tears have been validated.” How she got to where she’s going is a story worth telling.

“Receiving the award is both exciting and surreal,” she said. “It’s amazing to think I’ll be able to take technology from WSU to Spain to use to compare the mating habits of our non-native, hybridized honey bees in the U.S. to endemic ones that live on the Iberian Peninsula.”

Kirby conducts research in the WSU Apis Molecular Systematics Laboratory, directed by Steve Sheppard. “Apis” is the genus to which honey bees belong. With diagnostic and research labs plus a 21-year-old queen breeding program, the lab team works to create sustainable solutions to problems facing honey bees. They are arguably the world’s most important pollinator that contributes to agriculture and healthy food supplies.

Kirby’s Fulbright project name is not surprising: “Bees as Seeds: How Endemic Strains of Honey Bees Can Support Sustainable Apiculture (Beekeeping).” It aligns with her master’s thesis research.

She’s worked with two teams of engineering undergraduates to develop Radio-Frequency Identification Devices (RFID’s). The teensy chips are affixed to bees’ hairy backs to measure mating flights of queens and drones. Kirby will take hundreds of such RFID’s to Spain, which will allow her to gather information for numerous comparisons.

Additional related activities are planned for her Fulbright-Nat Geo. “I speak fluent Spanish thanks to my heritage, so I’ll interview regional beekeepers about traditions and folklore associated with honey and bee products, and about challenges they face, like global climate change. I will give queen breeding presentations and workshops with my Coordinadores Organisados de Agricultura y Ganaderia program hosts.”

She will also research historical archives and cultural expositions revealing the relationship between ceramic and clay arts and apiculture. Clay has been used to house hives, preserve seeds, store food, and build homes, and “the intersection of this medium with practical and artistic manifestations is fascinating to me.”

She explained that beekeeping, from honey hunting to agroecology and industrial agriculture, has manifested in almost every culture and country. She will visit the oldest known cave painting of a honey gatherer on the wall of Cuevas de la Araña (Cave of the Spider) near Valencia.

“To think of what inspired that artist eight thousand years ago to share this practice and capture history demonstrates how revered honey was, and continues to be. It’s incredible.”

One of Five Digital Storytellers

Also amazing is the fact that Kirby is one of just five scholars nationwide to receive the 2019-20 Fulbright-Nat Geo Storytelling fellowship out of more than 200 semi-finalist applicants. Since the prestigious, nationally competitive fellowship was first awarded in 2014-15, there have been only about 30 recipients out of nearly 2,000 applicants. Awardees have special opportunities to share stories on National Geographic world-wide platforms using a variety of digital storytelling tools, including blogs, text, photography, video, audio/podcasts, and public speaking.

While Kirby is having adventures, April Seehafer, director of the WSU Distinguished Scholarships Program, said she is most looking forward to continuing to read about and listen to what the Fulbrighter is up to in Spain. Having helped prepare for the application and interview, Seehafer knows that Kirby is already an experienced storyteller, something that impressed Nat Geo interviewers in March in Washington, D.C.

Kirby writes for and edits an online newsletter for Kelley Beekeeping, a 95-year-old Kentucky supply company, and writes blog posts for Mother Earth News and her own business, Zia Queenbees. It specializes in pollination and breeding products, and “exquisite hive products.”

In person, Kirby mesmerizes listeners with tales of how queens vibrate a mating call in “bee Morse Code,” how honey bees evolved about 100 million years ago, and how endemic honey bees are found today in Africa, Europe, and Asia but are slowly disappearing.

Her eyes sparkle as she recounts her adventures as a “nectar nomad and dedicated promoter of consilience, or the unification of knowledge and multidisciplinary approaches.” She details the time she placed mating nucleus hives with her select queens, encouraging them to mate with hardy drones from canyon wall pockets at the Benedictine Monastery of Christ in the Desert, some 13 wilderness miles by dirt road after 50 miles of highway north of Santa Fe.

“Storytelling is natural for me. I descend from many cultures that share oral storytelling traditions,” said Kirby. Her maternal grandfather was of Tiwa Pueblo Native American/Mexican Indigenous heritage and her grandmother was a member of Mescalaro Apache Native American tribe. Her father was from St. Vincent Island in the Caribbean. Kirby was raised in Las Cruces, New Mexico, not far from the Texas border.

She and her sister, Kelly, were raised by their mother, Rosemary Garcia Estrada Kirby. They take part each year in tribal festivities as members of the Tortugas Pueblo. Kirby includes her daughter, Isis Spitzig, 10, and son, Esai-Mateo Spitzig, 7, who are both students at Franklin Elementary in Pullman. They will join her for her time in Spain.

One of Kirby’s most interesting stories details how she was first stung by the beekeeping bug.

“I’d just graduated with an advanced liberal arts bachelor’s degree from St. John’s College in Santa Fe and volunteered for the Peace Corps, like my mother before me. My affinity for Rocky Mountain landscapes made me hope I’d be assigned to live in mountains. So anything beyond that, such as working with stinging insects, was fine with me.” Her wish came true.

She moved to a remote Guarani village in the Cerros de Ybytyruzu (Wind from the Hills), Paraguay, in mid-South America. In tiny Calle Mil (population 400, “and 350 of them were children”), Kirby inherited pet dog Joi Joi and a wood-slat shack from previous corps-persons. She slept under mosquito netting, dug her own latrine, and kept two wary eyes out for coral snakes, spiders, geckos, long-haired caterpillars, alligators, armadillos, and howler monkeys.

Kirby cultivated the villagers’ trust by drinking yerba mate tea with them, day in and day out. They were eager, they said, to create income streams to pay for elementary school, shoes, and supplies for their children. Her Peace Corps crash training in tropical apiculture sparked an idea. She visited regional beekeepers to learn about their businesses, and rode five hours by bus to capital city Asuncion to use cyber-café computers to do research.

At last, and as forewarned, “stinging insects” became part of her world. By day, Kirby and village “campesina” women used machetes to hack their way into dense forests, and hammers and saws to build simple hives. By night, wearing nets over their hats and dishwashing gloves as protection, they filled the air with smoke from smoldering bits in tin cans to calm the bees so they could gingerly capture wild swarms from coco trees. Shortly, the villagers had new sources of income: honey made by the bees, plus other products from the insects and their hives.

Two years passed quickly. She had planned to DJ in San Francisco electronica clubs when her Peace Corps service ended. Instead, she worked at a friend’s gardenia farm in Hawaii and then commercial beekeeping companies in Hawaii, Michigan, and Florida to learn more about the biological processes of the insects. Soon enough, she raised her own in New Mexico.

“It’s really evolved into more than a business or even a scholarly vocation to me,” she said.

An Enduring Act of Service

“Bees are considered a keystone species of livestock, being keys to the food chain. By working with bees, I sort of see myself as doing service to humankind. Becoming a caretaker of the future, of place and purpose,” said Kirby.

“Thanks to WSU, and the Fulbright-Nat Geo fellowship, I believe I can make a difference.”