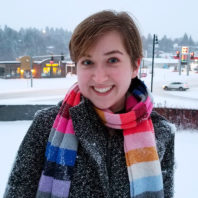 PULLMAN, WASH.—Washington State University senior Jacklyn Brendible has received a nationally competitive Udall Foundation honorable mention award in its tribal policy category, said April Seehafer, director of the Distinguished Scholarships Program. It is part of the Division of Academic Engagement and Student Achievement in the Office of the Provost and Executive Vice President.

In Line with Career Goals

Brendible’s paternal lineage ties to the Tsimshian Alaskan Native tribe, which settled in Metlakatla on the 2.3-square-mile Annette Island in the 19th century. She has spent time there every summer, and experienced life as a tribal member linked to the larger Ketchikan Indian Community in Southeast Alaska. Over time, she has developed a career plan that will allow her to blend her personal education and experiences, and use her skills to improve the lives and learning of Native children.

“As the Udall recognizes, she will be a role model for young students while also educating them in subjects she has expertise in—biology, horticulture, animal science, agricultural mechanics, welding, and crop science, for example,” said Seehafer, who worked with Brendible on her Udall application. Also supporting her through the rigorous process was WSU’s Native American Center leadership.

Brendible said, “When I learned the Udall selected me, I felt the organization understood and endorsed my career goals, and for that, I am very honored and proud.”

Her WSU Experience Set the Path

From an early age, Brendible thought she would study to become a veterinarian, having bred and raised her own Hampshire Cross sheep and been in Future Farmers of America through high school. At WSU, her interests took a slight turn as she learned about the different learning styles of people, and discovered that the one that suits her best—hands-on and experiential—aligns with her Native culture.

Around the same time, her years as a resident advisor in WSU residence halls fueled her drive to help people. She decided to pursue a Bachelor of Science degree with a major in agricultural education and a minor in soil science. They provide a good blend of her interests, she said. Upon graduation from WSU, she plans to teach, then ultimately earn a Ph.D. in Indigenous Studies to continue to give back to her tribe and family, and to Native Americans, in general.

Teaching in the Native Fashion

“I personally have had amazing opportunities for education and maybe taken them for granted, but I have realized that I can use my knowledge and skills to help others,” said Brendible. She knows exactly how she wants to teach.

Native Americans, such as her own family, “don’t tell you how something is or how to do something. They show you. It’s our tradition, how skills and knowledge are passed along.”

“I struggled with textbook-based classes in high school, but I always looked forward to agriculture classes because the instructor used hands-on demonstrations to connect topics to the real world,” said Brendible. “Becoming an educator, I hope to teach young Native American students courses through similar experiential lessons.

“I also plan to help them create and care for a vegetable garden, like I did for our elementary school. What better way to teach—and learn—science than in that kind of a hands-on way?”

Through her extracurricular experiences at WSU, Brendible discovered she is energized when leading. She visited the Native American Center as a freshman, hoping to meet new friends and get involved. She went on to became secretary of the Native American Women’s Association, and co-chaired the Ku-Ah-Mah student organization, helping to increase membership, hold a campus-wide powwow, and host an off-campus round dance to celebrate and educate about Native traditions and culture. She also plans to teach her future students in Alaska to also go out and get involved.

“In my role as a future agriculture educator, I want my students to learn by being outside, in their homelands and surrounding areas.”

The Udall as Validating

“The Udall recognition helps me see that my education and my career plans have merit, and that means everything to me.”

Jacklyn is the daughter of Jay and Samantha Brendible. Older sister Alexis is in medical school in North Dakota, and younger brother Jay is a WSU student pursuing a degree in construction management.

WSU’s first Udall award was received by a student in 2015, with six additional awards since, including a Udall D.C. internship placement. Recipients have had majors in fields ranging from nursing to wildlife ecology, and comparison ethnic studies to civil engineering and cultural anthropology. Udall awards at least 60 merit-based scholarships to students committed to careers in the environment, tribal public policy, or Native American health care. It is one of several prestigious, nationally competitive awards made to outstanding U.S. applicants.