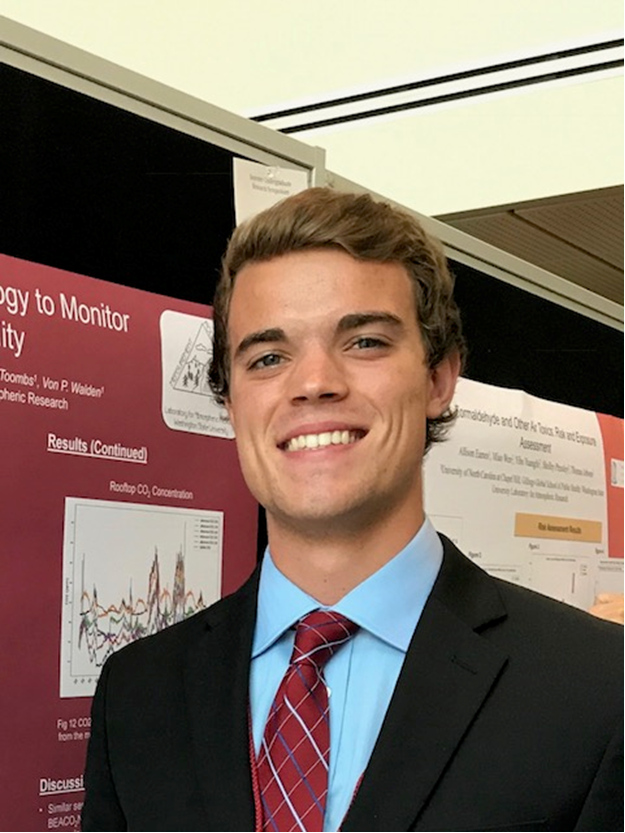 PULLMAN, Wash.—Washington State University chemical engineering senior Kristian Gubsch is headed in the fall to the United Kingdom’s University of Sheffield as WSU’s first recipient of a Marshall Scholarship for graduate study.

He is one of 46 American students to receive the award nationally for 2020, and is the only recipient from Washington and the Pacific Northwest.

“We are extremely proud to have Kristian as our first Marshall Scholar,” said WSU President Kirk Schulz, who submitted an institutional endorsement letter. “He is a remarkable student, scientist, entrepreneur, and leader whose impactful research, national awards, and international collaborations lead to an obvious conclusion: He will play a significant role in developing clean-energy technology and will impact critical climate-change conversations. We are excited for this Cougar’s future and the impact he will have on the future of the world.”

“I have had an amazing set of experiences as an undergraduate, in classes and otherwise, but I wasn’t sure if I’d next go to graduate school or get a job in the CO2-utilization industry,” said Gubsch, a member of the WSU Honors College. “Receiving the Marshall made up my mind and sets the path for my immediate future. I’m really excited to head to England to study with another set of world-class scientists like those at WSU.”

The Marshall is Gubsch’s third distinguished scholarship received while an undergraduate. Those awards encompass a small set of prestigious and nationally competitive scholarships available to U.S. students. He is WSU’s first student to receive an Ernest F. Hollings Undergraduate Scholarship from the National Oceanic and Atmospheric Administration (NOAA) in 2018, and for 2019-20 he was awarded the Barry Goldwater Scholarship and Excellence in Education Program award. He has also received numerous campus leadership awards.

Importance of the Marshall

The Marshall award was founded in 1953 by the British Parliament and named to honor former U.S. Secretary of State George C. Marshall and commemorate “the humane ideals of the Marshall Plan” following World War II. Each year, there may be up to 50 students awarded a Marshall. Applicants from eight regions of America are evaluated on academic merit and leadership and ambassadorial potential to improve U.K.-U.S. understanding. Scholars must have earned baccalaureate degrees in STEM, humanities, social sciences, and creative arts fields, and are funded by the Marshall to do graduate study with research at any of more than 150 British universities. Notable Marshall alumni include Pulitzer Prize winners, Academy Award nominees, Supreme Court justices, a NASA astronaut, and a Nobel Laureate.

Why the University of Sheffield

Gubsch carefully selected the University Sheffield, in Yorkshire, as his university of choice for the Marshall. There he will seek a master’s degree in energy and environmental engineering working with faculty mentor Peter Styring. Styring is a world leader in techniques to utilize carbon dioxide and chair of the CO2 ChemNetwork, the largest global network of researchers, industry professionals, and policymakers involved in the utilization of carbon dioxide for the manufacture of chemicals, minerals, and fuels. The U.K. Centre for Carbon Dioxide Utilization is also located at Sheffield.

In his second year as a Marshall at Sheffield, Gubsch will pursue an international business degree focused on management. He believes it will further prepare him for his career by developing the skills necessary to begin global commercialization and implementation of technology to capture carbon dioxide from its sources. These gasses would otherwise be emitted into the atmosphere, contributing to climate change; Gubsch envisions ways and means to convert it into valuable chemicals.

It was through use of his strategic leadership and networking skills that Gubsch found his way to the University of Sheffield with further plans for a pdoctoral degree back in the U.S. He had visited California’s Silicon Valley as part of the Harold Frank Engineering Entrepreneurship Institute program in the Voiland College of Engineering and Architecture. He shared his interest in carbon capture technology and was advised to contact faculty at Stony Brook University in New York. Conversations there led him to the Global CO2 Initiative at the University of Michigan’s Energy Institute, which led him to scientist Styring in the U.K.

As the University of Sheffield is a research partner with the University of Michigan’s Global CO2 Initiative—the only research initiative in the U.S. with a focus on CO2 utilization—Gubsch intends that his Marshall experience will help him return to the U.S. for his Ph.D. studies there in 2023.

Gubsch set his sights on an education and career focused in improving global climate issues while still at Fife High School; his family in Edgewood, Wash., includes Derek and Deborah Reece, and brother Evan. He plans to enter the carbon-dioxide utilization industry and become a leader in the field “by applying (his) several years of experience developing the technology to the practical integration of the technology into our industrial framework.”

At WSU, the Honors College senior is co-facilitating a first-year course for Honors students and has pursued since his freshman year several undergraduate research opportunities with mentoring faculty members. His work has involved investigations of air quality as well as carbon capture and conversions from carbon dioxide to calcium formate. As part of his NOAA award, he spent a summer in South Carolina at the National Institute of Standards and Technology examining ocean acidification and its impact on coral.

Gubsch applied for the Marshall at the encouragement of Honors Dean M. Grant Norton, Honors Associate Dean Robin Bond, and Distinguished Scholarships Program Director April Seehafer. He said he was reluctant at first, since the Marshall is open to a large, diverse set of students from all fields and would be very competitive.

“I thought, ‘What chance do I have to compete against students from Ivy League schools?’ But one thing I’ve learned from applying for other awards I’ve won and opportunities I’ve reached out for is that I have to be open to all kinds of opportunities because I can’t be sure of what I’ll get. I have learned to be open to being vulnerable.

“I went to the regional interview in San Francisco pretty composed, having done practice interviews at WSU. I reminded myself to be as articulate as possible. I thought I did pretty well, but when I got word that I’d actually won the Marshall I was excited, but for many reasons, it’s all still sinking in. Mostly now, I’m just concerned with this semester’s schoolwork, group projects, and final exams. As chair of the student group of the American Institute of Chemical Engineers, I’m also helping organize a regional spring conference here. I’ll think more about the Marshall and the many opportunities it opens up over winter break.”

A COP25 NGO Observer This Month

December is an especially busy month for Gubsch. He’s one of a handful of students selected nationally to travel to Madrid, Spain, as a “student-professional correspondent” representing the American Chemical Society at the United Nations Climate Action Summit as an “NGO observer.” The students are charged with helping promote climate science literacy among college and university students, will share information from the conference via blogs and social media, will write a chapter on a topic for an upcoming book, and will present at an ACS conference this spring.

The global climate-change summit Gubsch will attend, COP25 (Conference of Parties), is predicted to be the largest UN-sponsored gathering of climate change experts and policymakers held throughout the world in 2019. The COP is famous for negotiating the Paris Agreement in 2014, a plan to decrease global warming and deal with various impacts of greenhouse-gas emissions; the agreement is endorsed by nearly 200 nations worldwide.

Gubsch’s COP25-related blog entries are linked to from the homepage of the WSU’s Distinguished Scholarships website.