Washington State University senior biology and music double major and future veterinarian Thomas LeClair is the 2020 recipient of a prestigious, nationally competitive Fulbright Student Award that will fund his master’s degree studies in marine biology in Bangor, Wales. “I’m humbled to be able to go to Bangor University on a Fulbright and am excited for the opportunities this will provide and the future doors it can open,” said LeClair. 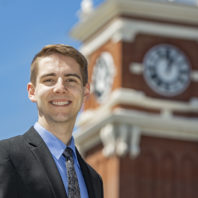 “WSU has a long tradition with the Fulbright organization, dating back to our first recipient in 1949,” said April Seehafer, director of the Distinguished Scholarships Program, part of the Division of Academic Engagement and Student Achievement (DAESA). “Thomas is our 65th student to receive a Fulbright to continue their education. His unique academic pursuits and interests are an excellent fit for this Welsh university.”

“I’m humbled to be able to go to Bangor University on a Fulbright and am excited for the opportunities this will provide and the future doors it can open,” said LeClair, a member of the WSU Honors College.

This fall, he will travel to the university’s School of Ocean Sciences to pursue his Fulbright topic titled, “Investigating Anthropogenic Effects on Cetacean Populations.” That is, the effect humans are having on marine ecology, specifically dolphins and whales. His program calls for nine months of master’s-level coursework and three of research.

“As varied effects of anthropogenic changes have already begun to take their toll on the seas, it is imperative that we gain a deeper understanding of both our relationship with the environment and what steps we must take to mitigate these existing human-made changes,” he wrote in his application.

Thanks to the Fulbright, LeClair can also pursue additional learning experiences.

“Studying and being in Bangor for a year will allow me to plug into both halves of my life. I’ll be able to gain the skills and knowledge I’ll need to succeed while satisfying both my practical penchant for science and my passion for music.”

While in the oldest city in Wales, LeClair—who sings in WSU choirs and plays the organ and carillon in WSU’s Bryan Hall—will actively engage in the Bangor University’s music program and pursue musical and community activities through the ancient but very active cathedral near campus.

Farm to Sea and in Between

When he returns from his Fulbright in fall 2021, LeClair will begin studies at the WSU College of Veterinary Medicine, where he has already been accepted. His career goal is to bridge gaps between marine conservationists and farmers in the Puget Sound region.

He comes by that naturally as he is at least a 20th generation farmer who can trace his dairy-farming ancestors back to the Netherlands in the 1400s. His maternal grandparents, Minne and the late Trudy Van der Hoek, carried this farming tradition to the United States in the 1960s. His parents, Joe, who attended WSU, and the late Annette started LeClair Farms in 1996, the family farm which is still going strong. They moved the farm to Mount Vernon in 2000, where LeClair grew up with his older brothers Michael, who raises heifers, and Simon, a nurse, and younger sister Juliana, a WSU junior studying agricultural and food business economics. The family all worked on the farm together and each sibling has remained active with it—they all still live within a quarter mile of each other on the dairy.

LeClair knew from childhood he would likely not become a full-time farmer himself because of severe allergies. One of the escapes from them, he said, were family visits to nearby estuaries, tide pools, and ocean beaches where he experienced the sea and marine creatures firsthand. They left him with an appreciation for science and learning more.

Firm Knowledge Base at WSU

As a child, he said he thought he might “be an artist/drummer/scientist (vaguely a chemist) who lived in an R.V. and traveled the world.” As a student at Mount Vernon Christian High School, he decided to attend WSU after graduation because of the “tremendous opportunities to do impactful research and engage in music,” while exploring his majors of music and… “something else.” But what would “something else” be?

His participation in the first cohort of WSU Research Scholars his freshman year helped him find an answer. That program, part of DAESA, pairs first-year students with a STEM faculty mentor and provides many opportunities to learn about undergraduate research and more.

In LeClair’s sophomore year, he met Wes Dowd, associate professor of animal physiology in the School of Biological Sciences, part of the College of Arts and Sciences (CAS). In the lab, LeClair built an apparatus to manipulate the body temperatures of intertidal mussels at low tide. He is currently working on a project to study epigenetic DNA modifications that coincide with a developmental shift in temperature tolerance in mussels, a phenomenon related to the study of global warming and its impact on the sea and its creatures.

“In the end, chemistry gave way to biology, which I declared as my major,” he said.

“I had no doubt I wanted to major in music.” An organist and choral singer, music was, in fact, the impetus for one of two international experiences in the Netherlands during his baccalaureate program. He used that trip to inform his Honors College thesis graduation requirement. He met with organ builders and explored archival materials in his grandfather Minne’s home province to research and write his thesis titled, “Toward an Understanding of Friesland’s Village Organs.”

LeClair is particularly keen about organs, including those at WSU. Few know, he said, that there are three pipe organs on the Pullman campus—the famous one in Bryan Hall, another in Kimbrough, and one more. In fact, he was key to rediscovering that one, a donated, long-forgotten Robert Morton theatre organ that lives in Webster Hall, the physics building, resting on a dais behind a partition in a lecture hall. For fun, he has researched the instrument and helped to make it work again.

“I just need a little more time, and maybe a little help, to get it completely back in order.”

Other accomplishments beyond his studies include service as a student ambassador and officer for CAS, a residential technology assistant for the WSU Dept. of Housing and Residence Life, and a lab assistant for the WSU Access Center. He is president of Allegro: the Student Association for Music Advocacy, an Honors mentor and member of its student advisory council, a singer with WSU’s Madrigal Chamber Singers and concert choir, president and founder of the WSU Organ Club, and a pianist for Concordia Lutheran Church. He participated in the Southeast University International Honors Program in Nanjing, China, received the President’s LEAD award, is a Washington State Opportunity Scholar; and is a Regent’s Scholar.

As his undergraduate years come to their conclusion, he recently received two more recognitions of which he is very proud: selection as a WSU Top Ten Senior in the performing arts category and the Outstanding Senior in biological sciences.

“My time at WSU has been incredible. I’ve been able to thoroughly enjoy many opportunities and am grateful for all of the support I’ve had during my time here from family, faculty, and friends.”