Washington State University biochemistry major Owen Canterbury has received a Fulbright U.S. Scholar award to conduct research at Germany’s Heidelberg University, said April Seehafer, director of the Distinguished Scholarships Program. “I am pleased to be selected as a Fulbright recipient and I think it will be a really good experience both academically and personally,” said Canterbury. 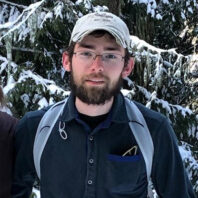 “I am pleased to be selected as a Fulbright recipient and I think it will be a really good experience both academically and personally,” said Canterbury.

Seehafer said, “Owen continues WSU’s long tradition with the Fulbright organization, dating back to our first recipient in 1949. He is our 66th student to receive a Fulbright to continue their education.”

Canterbury will investigate the mechanisms involved in bacterial ribosome-associated protein quality control (RQC) under the mentorship of Heidelberg professor Claudio Joazeiro, an international leader in the study of proteolysis.

In addition to his studies, Canterbury intends to volunteer at an organic farm, play soccer, and run in the rural, mountainous countryside where his maternal grandmother was raised.

“I took seven semesters of German language and literature at WSU, and I plan to put that knowledge to good use as I study, make new friends, and represent WSU and America abroad,” Canterbury said.

When a student at his hometown Ellensburg High School three hours west of Pullman, he enjoyed science but also found that studying poetry in humanities classes was fun. He advanced to regional Poetry Out Loud competitions, a nationally organized arts program.

He chose to attend WSU because, he said, “the cost-to-opportunity ratio was as good as I could find anywhere, plus it’s known for having many professors who take pride in impacting the educations of their students.” As soon as he got to campus, he looked for undergraduate research positions to advance his “professionalism and problem solving.” He applied for a job cleaning zebra fish tanks.

He did not get the job, but his extracurricular experiences—high school poetry recitations, Knowledge Bowl participation, and running—caught the attention of Michael Varnum, associate professor in Integrative Physiology and Neuroscience and scientist using the zebrafish. His lab investigates the molecular mechanisms of ion channels that are directly activated by intracellular cyclic nucleotides.

“He saw I could do the science, but I think he liked that I was well-rounded. I’ve worked in his lab since January 2018 and it has been a great experience. I’ve learned how to troubleshoot problems, get great feedback, and am co-author on a manuscript. I also really appreciate Dr. Varnum’s Shakespeare quotes.”

Yet it’s a quote from Voltaire’s Candide that Canterbury uses in reference to his methodically planned undergraduate journey: “We must cultivate our own garden.”

In addition to his biochemistry studies and lab research, he has been an undergraduate research peer mentor for the Office of Undergraduate Research, was an intern researcher at Duke University in the summer of 2019 having received an Amgen Scholarship, bred different varieties of squash in his garden, and snipped his Bonsai trees into order.

“Gardening’s a lot of work, but in the end, you always have something to show for it.”

Not always so in science research, he said, but it’s the never-ending process of asking questions and finding answers that he enjoys.

In Germany, his work will focus on the RQC enzyme RqcH—present in both humans and bacteria—and he will strive to identify what cofactors assist RqcH in the bacterial system—a pathway that is not well understood. Defective protein quality control is often a causative element of neurodegenerative diseases and a better understanding of RQC has the potential to generate novel therapeutic options, he said.

He explains that every cell is made up of proteins and other biomolecules, “which don’t last forever”. The body has quality-control methods to break down and remove proteins—but they don’t always work properly, as in cases of neurodegenerative disorders. He is interested in when things don’t go as expected, when signaling goes wrong, for example. The RqcH pathway is understood to rely on poly alanine tailing to tag incomplete proteins but how it performs the tailing process has yet to be deciphered.

In addition, RQC is significant from an evolutionary perspective, he noted in his Fulbright application.

“As variants of the pathway are present in all organisms, it provides an opportunity to trace the development of proteolysis from simple organisms to complex ones. Furthermore, some pathogenic bacteria use RqcH enzyme homologs to interfere with the host RQC process and promote virulence.”

When he returns from his Fulbright experience in Germany, he plans to enter a doctoral program in biomedical sciences at the University of North Carolina-Chapel Hill. He intends to study the interactions between the ubiquitin-proteasome system and diseases like cancer and neurodegenerative disorders His career goal is to be a principal investigator at a university studying molecular pathology, ultimately contributing to the advancement of health care worldwide.

“WSU has provided me with so many opportunities to learn, to research, to serve other students and give back in a meaningful way. The Fulbright helps me on the next adventure. But I’ll always be grateful for my WSU experience.”