John Bussey, Kalli Stephens, and Thomas Ballinger have received $7,500 awards to support their education, said April Seehafer, director of the WSU Distinguished Scholarships Program. Prestigious, nationally competitive Goldwater awards are given to high-achieving undergraduates intending to pursue careers in math, the natural sciences, or engineering (STEM) “WSU has established a strong set of Goldwater awardees over the years, and the addition of this year’s recipients reinforces that tradition,” said Seehafer. 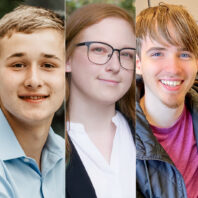 Prestigious, nationally competitive Goldwater awards are given to high-achieving undergraduates intending to pursue careers in math, the natural sciences, or engineering (STEM). These latest awardees bring WSU’s total number of Goldwater recipients to 48 since the first in 1990.

Bussey, a sophomore from Olympia, is an Honors College student majoring in materials science engineering, minoring in environmental and resource economics and mathematics, and seeking a nuclear materials certificate. His undergraduate research mentors include John McCloy, Marc Weber, and Jacob Leachman at WSU’s School of Mechanical and Materials Engineering, and Brian Wright at Olympia High School.

Stephens, a senior from Hurricane, Utah, is majoring in genetics and cell biology. She is a member of the inaugural cohort of students in the National Institutes of Health-funded Maximizing Access to Research Careers (MARC)-WSU, a two-year program of scientific research, leadership development, and graduate-school preparation. Her mentors are the School of Molecular Biology’s (SMB) Joy Winuthayanon, Assistant Vice Provost Mary Sánchez Lanier, and Integrative Physiology and Neuroscience’s Samantha Gizerian.

Ballinger, a junior from Reno, Nevada, is majoring in genetics and cell biology as well as music. He is in SMB’s Students Targeted Toward Advanced Research Studies (STARS) program, which  allows undergraduates to earn an accelerated Bachelor of Science degree in three years—including research rotations and mentorship–and move into a doctorate path. His mentors include SMB’s Cynthia Hazeltine, Vice Provost for Academic Engagement and Student Achievement William B. Davis, the Institute of Biological Chemistry’s Philip D. Bates, the School of  Music’s Yoon-Wha (YUNA) Roh, and his Reno piano teacher Jeff DePaoli.

“WSU has established a strong set of Goldwater awardees over the years, and the addition of this year’s recipients reinforces that tradition,” said Seehafer. Her program is part of the Division of Academic Engagement and Student Achievement (DAESA) in the provost’s office.

Goldwater said 417 awards were made to U.S. college students — 308 to natural sciences majors, 64 to engineering majors, and 45 to math and computer science majors. 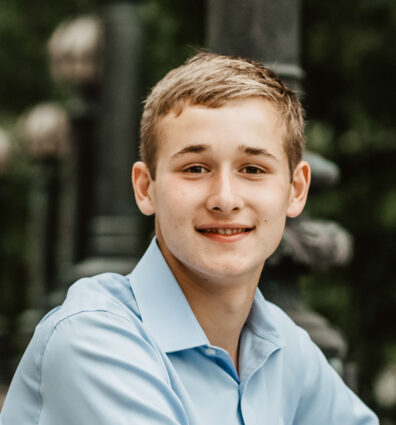 Bussey’s summer internship is at the Consortium for Risk Evaluation with Stakeholder Participation at Vanderbilt University in Nashville, Tenn., where he is studying materials for safe disposal of nuclear waste. This work continues his quest to better understand materials involved in nuclear waste storage in order to safeguard human health and the environment for over 100,000 years, he said. It adds to this future researcher’s career goal to design, synthesize, and characterize novel materials that can help address nuclear waste, climate change, and other environmental sustainability issues.

A Distinguished Regents Scholar, he chose to attend WSU after meeting with McCloy and seeing the opportunities WSU could offer. Plus, his Cougar parents met in front of Honors Hall, where Bussey has lived his entire time at WSU. His father, Troy (‘94 BS and ’96 MS, both in chemical engineering) works for Pioneer Technologies Corp., and his mother, Carie (Ingold) pursued pre-nursing studies at WSU and today works for Olympia Obstetrics and Gynecology.

When not in classes or researching, Bussey busies himself as a delegate and recruitment chair of the President’s Council of Student Advisors for The American Ceramic Society, and at WSU as an ambassador for the Voiland College of Engineering and Architecture and facilitator for Honors 198 (Honors First Year Experience) and 298 (Approaches to Global Leadership) courses. He also serves as treasurer and blacksmith-forge builder for the Materials Advantage Club, and as an officer of the Honors Student Advisory Council, among other opportunities.

“Receiving the Goldwater is certainly an honor for me, plus it recognizes that environmental sustainability is a critical issue for our collective future that requires advanced research. It’s a vindication of the work I’ve been doing,” said Bussey. “I’m excited to see what the next few years of my education holds and the Goldwater enables me to double down on my efforts.” 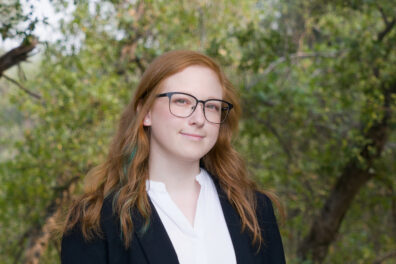 Stephens plans to earn her Ph.D. in biomedical sciences with a focus on reproduction and development. Immediately out of high school, she attended culinary school and worked as a professional pastry chef. The move from preparing and presenting foods to pursuing science at a top research university wasn’t as big of a leap as it might seem, she said, because “both involve working through protocols, like recipes—it’s just a difference in the chemicals and materials you’re using.”

Her path from one to the other was deliberate. After being fastidiously organized to do catering in Utah for large events like the Sundance Festival, she grew weary of the “crazy hours” and determined to change careers. She worked in a medical clinic as a receptionist and then medical assistant and thought of going to college to become a physician. As her husband, Hayden Wright, pursued his Ph.D. in neuroscience, she transferred to WSU from Spokane Falls Community College to access research herself. Since moving here in 2015, they have enjoyed the Pullman region, community, and recreational activities, she said.

She took intentional, progressive steps. She volunteered in Winuthayanon’s lab in 2019, and became fascinated with the roles of estrogen and progesterone in the female reproductive tract during early pregnancy. She joined the WSU Louis Stokes Alliance for Minority Participation (LSAMP) program, received a research award, and placed first in a conference research presentation. In 2021, she was accepted into the first MARC cohort of future biomedical researchers. She also received her own research project in the Winuthayanon lab which led to her receiving a top crimson award at the Showcase for Undergraduate Research and Creative Activities (SURCA) in spring for her project titled, “Proteomic Analysis of Extracellular Vesicle Content in the Mouse Oviduct During Early Pregnancy.”

“My experiments may identify critical factors in the oviduct that are important for specific developmental stages missing from cultures used in assisted reproductive treatments (ARTs) and will hopefully improve success rates,” she said.

Receiving the Goldwater “was a real confidence booster,” said Stephens, adding, “and the application process was amazing because it made me think about my future and what I want to do and why I’m doing things now to get there.

“I was surprised to receive the award. The Goldwater scholarship will make a big impact on my future, and I am grateful to have been chosen.” 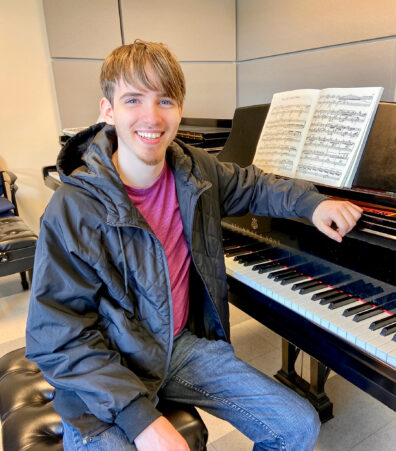 Ballinger will earn his Ph.D. in molecular biosciences and intends to become a lead researcher who develops hypotheses and designs experiments, likely researching aging and development and what determines how fast an organism matures and its lifespan. He also has a passion or synthetic biology, that is, the design and manipulation of organisms with genetic tools to serve a purpose.

“The concept of aging is kind of wild—how long whales lives compared to frogs, some of which only live for two weeks. There are no good explanations for this in classes, what mediates aging. So, I believe it’s an area of research people should be pursuing.”

His first SMB STARS lab experience was with Bates, focused on maximizing plant lipid yield using genetic modification. His second was with Cynthia Haseltine, exploring purification of an antimicrobial protein from the archaeon Saccharolobus solfataricus. And his third is with Jennifer Watts, studying aging of the reproductive tract in C. elegans.

Ballinger’s interest in music keeps pace with his pursuits in science. With support from his parents William Patrick Ballinger and Mary Emma Ballinger, he’s played piano since the age of eight. He’s given public performances in high school and placed in solo and ensemble competitions throughout Nevada. At WSU, he enjoys playing classical compositions and likes composers Maurice Ravel and Frederic Chopin. Ballinger won first place at the New York Artists International Competition and the WSU Concerto Competition in 2022.

A National Merit Scholar, he said he chose WSU for his education because of its genetics and cell biology program, the SMB STARS program, and the music program in piano.