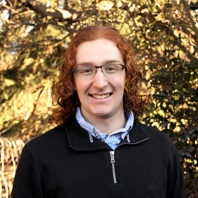 “Patrick’s many academic and community accomplishments, plus his diverse interests, helped position him well for the Truman award, and led WSU to recommend him highly,” said April Seehafer, program director. It is part of the Division of Academic Engagement and Student Achievement in the Provost’s Office.

Patrick is from nearby Moscow, Idaho, the son of Pete Robichaud and Martha Lovett. He is a lifelong outdoors enthusiast in the Pacific Northwest. His passion for nature led him to engage in activities to gain and share knowledge about sustainable practices, and to seek a science-focused education in the Voiland College of Engineering and Architecture (VCEA) at WSU.

“I want to be able to bring science into future political discussions and processes, which could help influence funding allocations, laws, and decisions made on a variety of local, national, and international issues, such as water rights,” said Robichaud.

“I see my future role as being someone who can apply science facts and logic for the good of society. I plan to become someone who will influence climate decisions and water governance policies with decision makers.”

Robichaud has worked since high school to build a resume packed with educational and service achievements related to environmental issues, with an increasing focus on water and sustainability. In addition to his engineering classwork, he has participated in undergraduate research since his freshman year, been selected for National Science Foundation-sponsored Research Experience for Undergraduates summer project, received a NASA Space Grant to investigate erosion after wildfires in the Columbia River Basin, championed a proposal to require filtration in water treatment plants that are susceptible to fire, and wrote a resolution to the Associated Students of WSU student body leadership; although it did not pass, it would have supported the breaching of the dams on the Lower Snake River.

Three science-related achievements stand out. As a member of a VCEA Engineers Without Borders club, Robichaud helped to devise, fundraise for, and install a pump for a Panamanian village that is situated 500 feet up a steep slope above its water source.

“Hearing how the new water system has made a difference in the villagers’ lives was incredibly motivating and confirmed the critical role water availability plays in improving quality of life,” he wrote in his Truman application. “Direct access to water is especially important as the climate changes and clean, accessible water becomes scarcer.”

Robichaud also gathered funding to attend the United National Conference of the Parties (COP 25) in Madrid in December. It was the largest global climate conference in the world. He met and networked with international policy makers there.

And, he was one of two WSU students selected to present a poster at the American Association for the Advancement of Science meeting in February 2020 in Seattle. His poster, titled, “Climate Change in Reducing Water Storage in the Pacific Northwest,” won best poster in the environment and ecology category for undergraduates.

In addition to academic and science achievements, he has sought to broaden his understanding of human and societal activities. He has, for instance, led WSU student body efforts around Earth Day activities, served on the President’s Student Advisory Board, coordinated mountain biking activities for the National Youth Science Camp, gone twice on study abroad trips, led activities at the WSU Outdoor Recreation Center, and facilitated a global leadership course for the WSU Honors College.

Robichaud is WSU’s fourth student to receive recognition from the Truman Foundation, following a finalist in 2017 and two awardees in 1990 and 1983. The Truman Scholarship helps pay for graduate education and leadership training, and requires public service work for three to seven years following graduation.

This year, the Truman Foundation selected 190 finalists from 136 institutions, starting with an initial pool of 773 endorsed students from 316 institutions. Finalist selections are based on leadership, public service, and achievement achievements, according to the foundation website.

The WSU Distinguished Scholarships Program has worked since 2011 to mentor students seeking a variety of high-caliber awards that include Fulbright, Goldwater, and Udall. More than 300 award recipients from WSU are featured in the Distinguished Scholars Gallery in the Compton Union Building on the Pullman campus. Seehafer and a large group of advisory board and committee members counsel and support student and help prepare those considering and applying for these large awards that boost their educational experience and add to their personal and career objectives.